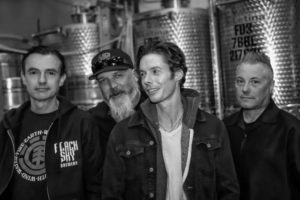 The Swifts are a pop punk outfit based out of Colorado, and they have dropped an excellent debut album with All Sunshine which was recorded and produced by Ahrue Luster, guitarist for Ill Nino.  All Sunshine is full of hooks, rockin’ rhythms and punchy well thought out lyrics. While The Swifts do at times sing about the heavy stuff they are also the self-proclaimed “Ultimate Dad Band!” so you know they are trying to have as much fun as their listeners.

Do you feel that the Denver scene and the Rocky Mountain scene as a whole affects your sound? Do you think if you originated somewhere else, say New York, you would sound completely different? Is there specifically a “Denver pop punk sound”?

Mike : No, I don’t think that the Denver/Rocky Mountain scene affects our sound. These days I don’t think there’s a specific Denver pop punk sound that I can point to. I grew up on 80s and 90s punk from southern California and Chicago. I’d like to think we sound a bit like a mix of those.

What sort of touring aspirations do you have to support the new album All Sunshine? When does the band expect to tour this year or next? And will you tour Europe or the USA first?

Mike: We’d love to do some short tours around the US. We don’t have anything nailed down just yet but stay tuned. 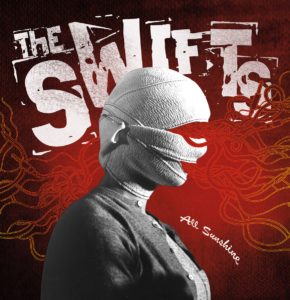 You have songs on All Sunshine that speak on the heavy subjects like grief, depression and betrayal. Once the songs were recorded and released was there a catharsis for you and the weight of those events faded a bit? If a fan who could relate to those emotions wanted to chat about them how would you feel about that?

Mike: Yeah for sure. It’s a surreal experience to write a song that’s so personal and then share it with other people. It sort of feels like I’m not carrying the emotional burden by myself when other people connect to it. I’m pretty open about talking about the subject matter of the tunes, so yes I’d be open to chatting with a fan. That is something I would have loved to do with the writers of songs that impacted me.

Having metal guitar god Ahrue Luster produce All Sunshine is a very interesting choice. How did that come about? What was it like working with him? Did his efforts on All Sunshine elevate your original vision of the album?

Mike: We connected with Ahrue through a friend that had worked with him in the past. We loved what we heard so we reached out and asked him to produce our first EP. He came to listen to us rehearse so he could get a feel for what we sound like and we went from there. I really loved working with Ahrue. He definitely pushed us on All Sunshine. He had us re-write parts and change lyrics that he thought didn’t work. He drove so many things that made the songs better. Not only is he incredibly talented in his craft, he’s just an amazing human being. An example is one day called me asked if he could lay down some tracks on October Sky. He knew how much that song meant to me and wanted to make it something special. I told him to go for it and I loved how it came out. The acoustic guitar and piano on October Sky is all him.

Where do you see your band in the next couple years and what are your goals during this time?

Mike: Our goal has always been simple and that’s to have fun. It’s really easy for playing in a band to start to feel like work and we try to keep that in check. We just want to play live, keep writing and hopefully get back in with Ahrue to record again.

“The Swifts” is an interesting name for a band; is it related to the bird? Velocity? Or some special other meaning? And how did you come up with the name?

Rob: I would like to say there was some special meaning, but there really isn’t. The name was sort of just out of the blue. We found ourselves quickly playing together on a gig and needed something simple to sort of match what we were throwing together. The name just kind of stuck and became an identity quickly.

What are some of the other bands in Denver that you feel are excelling in their music and that you enjoy performing with? What national bands would you like to share a stage with?

Mike: We really like playing with Michael Morrow and the Culprits. Michael is a local legend and plays amazing southern rock. In terms of national bands, man that’s hard to narrow down. Let’s start with Jimmy Eat World, Descendents, Weezer, The Longshot, NOFX, Against Me!, Screeching Weasel, Propagandhi, etc.etc.etc. The lists goes on and on.

What is The Swifts go to meal before a show? Are there any other rituals or just general weirdness you do before performing?

Mike: We sit around and drink a few beers and try to visualize all the mistakes we’re about to make.

Jim: I always wait for Mike to figure out where we’re from in the band introduction. Sometimes we’re from Colorado, other times, Sweden. It’s always an adventure. We also have some spirited discussion as to who has the worst hearing loss and in what ear to determine which side of the stage we are on.

There are some excellent guitar hooks and six string work in general on All Sunshine. So Rob, how did you craft your lead lines and guitar work overall? Where does your inspiration come from? How do you work concepts out? And at what point to you present an idea to the rest of the band? 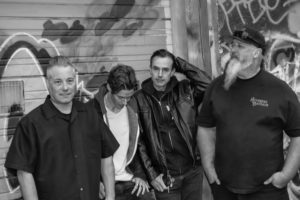 Rob: Thank you. Mike played a lot of what you hear as well. Most of what I played on the album started with Mike’s initial arrangements, the way he plays and what he recorded as scratch to begin with. As far as the leads and melodies go, I feel like there are melodies that are just naturally present in the songs that Mike writes. That makes it really easy for me to just play what I believe I hear already. I play through them in a group setting at rehearsal to the point that we feel they are melodic and add something to the songs. Once we track them, it is Ahrue’s creative input that brings all the guitars to life. During the whole process, Ahrue has always had a big influence on what I play and finally keep. But all of that aside, I just love playing our music, and that’s where the inspiration starts for me.

Jim and Rich, as the rhythm section, what is your role in the writing of the songs? And we’ve heard you’re the metal guys in the band. How does that shape what you bring to a tune? Do you ever go way overboard METAL and Mike and Rob have to throw cold punk water on the situation?

Rich: In general, the songs were brought to the band substantially complete with multiple sections, scratch guitar, vocals, and drum machine parts. We will work the song and move things around with the arrangements as a band. This process has worked well for us and has been quite efficient in presenting the ideas.
With the drums on “All Sunshine”, I tried to convey the spirit of the songs while making it less like a machine and more “drummer-esque”. We had some inspired moments, along with Ahrue’s input during the recording sessions, that helped shape the songs further. A new song may go through many iterations before we land on a final roadmap.
As far as METAL goes, I don’t really like to wander too far away from the style of the music I’m trying to present in any band. I find it’s best to play within the style and add hints of other styles for flavor. All ideas are welcome though,,, Sharing and being open to ideas is what helps give the band their sound.

Jim: My metal background has never been an issue with these guys. I have been a big time metal guy forever, and what I add seems to fit in nicely. Not sure if nicely is what we’re looking for, but I do what I can do add something unique.
I totally love having Ahrue taking care of us in the studio, because I feel like he gets what I’m trying to add from a metal background, keeps me in check, and helps me add tasteful things to a punk project.

When your band gets a recording contract and starts working a new album, do you plan to re-record some of your older songs mixed with new songs?

Mike: Do you know something we don’t? Let’s talk more about this contract.

What have been some of your favorite albums released in the last year of any genre?

Mike: The Longshot – Love is for Losers was my favorite album from last year.
Jim: Black Label Society – Grimmest Hits, because Zakk Wylde. Nuff said for me. That and The Dead South. They rock.
Rob: Devin Townsend – Eras

What’s the best part about being in The Swifts?

Mike: Just getting to play music with my band brothers is the best part. I absolutely love it.
Jim: I have never been this happy with a project before. These guys are my best friends, and you don’t get that in any band situation much anymore.
Rob: It’s honestly a blast.

My last question and again thank you for your time and music: What other endeavors and hobbies do The Swifts partake in besides music?

Mike: We all have kids/families and that’s where most of the time goes. Other than that we just try to act like we’re not as old as we are.

Connect with The Swifts: