Hot off the release of their new album, “From the Gallery of Sleep”, Night Verses are staying very active and are currently touring with Strawberry Girls and Andres. Despite being exceptionally busy, bassist Riley was gracious enough to give a little bit of time and insight to some of the questions that I had for him and the band. We get the chance to discuss the departure of a vocalist and what it does to a band, touring plans, and even more. For those of you that haven’t checked out the album, it truly is a work of art that is meant to be experienced by any progressive metal/instrumental fan, and is bound to make it on year end lists (this is easily top 10 material guys and gals). Be sure to give the band a like on Facebook and pick up their new album, here, on your platform of choice! 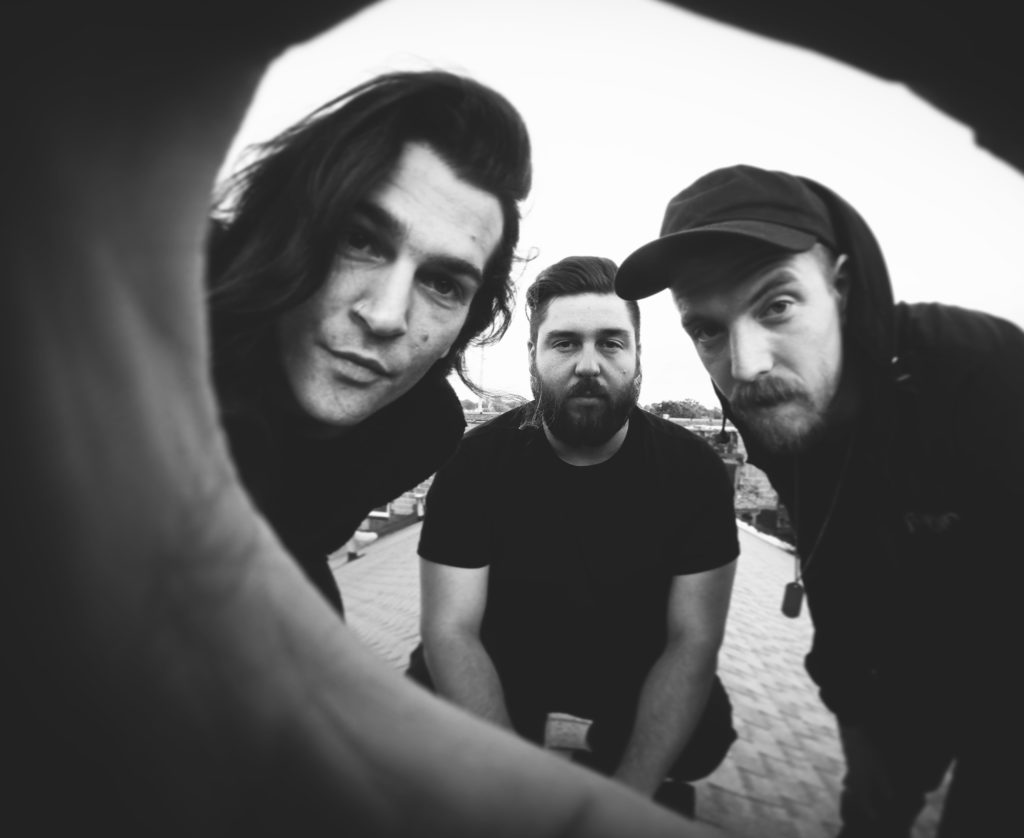 Losing a vocalist can be very detrimental to any band; what caused you to want to continue on and what made you choose to go instrumental as opposed to getting a new vocalist?         Nick, Aric and I have been playing and writing music together for over 16 years. Before Night Verses started we technically were an instrumental band, and before Douglas joined the band we had lots of trouble finding vocalists that we liked, also who complemented our sound. Instead of going through that process again we decided we could be more creative and more free instrumentally.

Is there a different mindset that you all took in order to write the new songs without vocals as opposed to when you had a vocalist?
Not so much. We essentially wrote the same – except in areas where we would have to simplify for vocals, those parts were now a challenge to make more interesting between the 3 of us.

How did the “Drum Chain” video with Aric come about?
Aric is hyper-creative. He’s constantly thinking of ways to innovate the things he is doing – and the drum chain was one of his creative brain-children. We’ve amassed such a talented and able group of friends over the years and this was a cool way he thought to showcase that. Nick and I compose all the music for them once Aric arranges the drum sections. It’s a lot of work but it’s really fun.

Is it difficult for Aric to split time between Night Verses and Fever 333? Since they are different genres, is there a different mindset when writing songs?
It can get hard at times, Aric’s time is split pretty tightly at this point. Scheduling and planning for 2 active bands at the same time is as difficult as you might assume but it’s manageable. I can’t speak for his writing – but even with Night Verses and The Fever having a a different approach and mindset towards music I don’t think it’s problem for Aric to switch back and forth at all. The three of us have always been open to working on different musical projects in general, Nick has a solo metal EP he just released, for example – so I think it’s more just another addition to the musical repertoire.

To those that haven’t been able to see you live: are you continuing to play instrumental versions of your old songs or do you strictly stick to newer songs?
All new instrumental songs off the new record.

What kind of influences did you all have when writing the album? We’re there specific albums that helped guide the writing process?
This album was influenced by everything from 2001: A Space Odyssey to 70’s prog to a Tool performance I saw last year to some graffiti art my friend made etc… We purposefully allow all forms of art to seep into our subconscious to influence our creativity when we’re composing.

What are some of your overall biggest influences as artists?
Collectively I’d say Tool, Pink Floyd, The Mars Volta, RATM, Massive Attack and DJ Shadow to name a few.

Are there plans of touring to support the new release following your tour with Strawberry Girls and Andres? Possibly overseas?
Yes! Working on this as we speak, no details just yet though.
✕