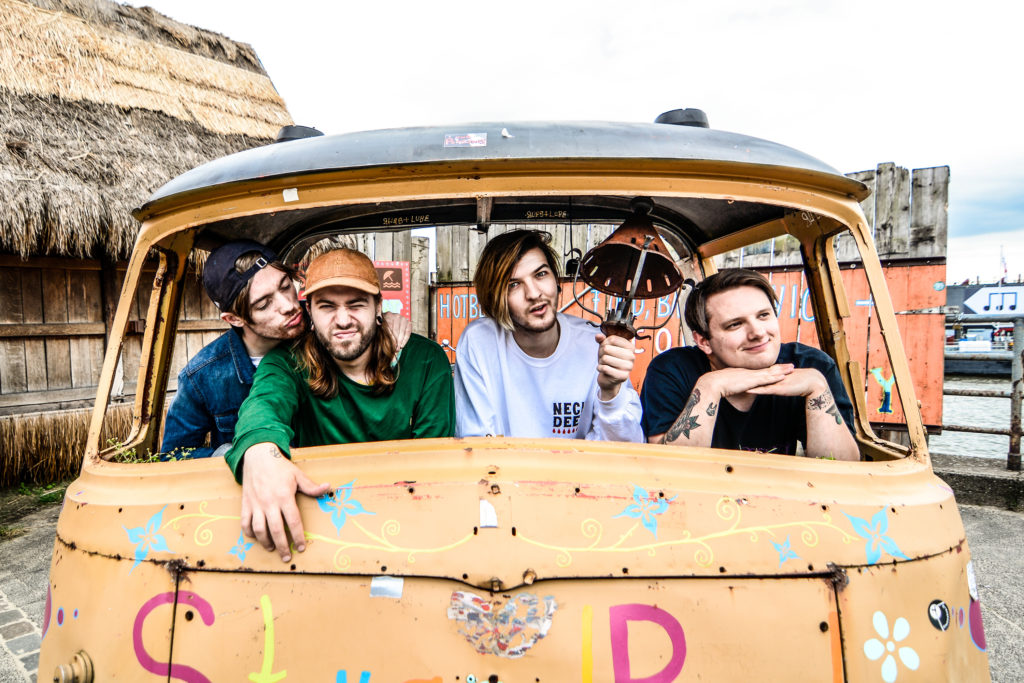 The pop-punk scene is seemingly more crowded than ever before with bands trying to hit a metaphorical “home run”. Liverpool-based WSTR is clearly on the path to that aforementioned success, releasing a successful debut EP in 2015, and touring hard off that initial attention, the band has clearly hit a tipping point in their career. With their debut full-length about to drop in January (Red, Green or Inbetween), the band is one of the fastest-rising acts of recent memory. Going from basements to sold-out support tours clearly hasn’t rattled the band, and guitarist Kieren Adler stopped by to give us the scoop on the new record, how the band is coping with success, and being a “Gunner”. All hail the Premier League. Check out his answers below! And you can view their video for “Lonely Smiles” below, too.

It’s been almost 2 years since the release of your first EP and your impending debut full-length album – how have you been able to carry that momentum for that long?

We honestly have no idea. We released our debut EP in September last year and managed to keep it relevant and do some pretty wild shit for a band with only 6 songs out. We still get people discovering SKRWD now though so it obviously isn’t buried in ancient history just yet. But we are stoked to finally get to play new songs live and have people hear what we’ve been working on the past year.

The pop-punk scene is a crowded place right now. How have you been able to set yourself apart?

Being signed is obviously a big help because people will at least give your band a chance based on the fact that you’re signed to that particular label. I guess not rushing to just throw any old thing out there too, a lot of bands do that and first impressions count for a lot so.

What was your childhood like? How did you get into music, and who were some of your favorite bands growing up?

My childhood was pretty normal! I was never like, crazily into music when I was a kid but I did have Rollin’ on cassette so I guess that makes me kinda cool. I also had the 5ive Greatest Hits album, that was my first ever CD. Am I still cool? It wasn’t until my step brother introduced me to blink-182 that I really started giving a shit. They blew me away, I was instantly hooked and stole all his CD’s for my own. It was them that made me want to pick up an instrument and give it a go myself.

2016 is almost over. What have been some of your favorite records of the year?

There’s been some bangers this year! ROAM started the year off well with ‘Backbone’, I jammed the Trash Boat album ‘Nothing I Write You Can Change What You’ve Been Through’ hard too, I think they smashed it with that one. I’d say either that or the latest Trophy Eyes record ‘Chemical Miracle’ are my albums of the year.

Well funnily enough only one person in the band is actually from Liverpool and I’m not that person. I live on the South coast! My team is Arsenal. Sammy is an Arsenal fan too so thankfully I’m not a sole gunner in the band.

Was there any shock between when you first started out playing tiny shows, to now where you’re playing festivals/large venues? If so, how did you cope with it?

We got thrown in the deep end pretty quick so we had to cope with it from day one really! One of our first ever shows was with Neck Deep and PVRIS at Central Station in Wrexham. It was sold out and we played in front of about 400 people. For dudes that hadn’t played outside of their hometown before that was weird. Obviously the reactions have gotten a lot better over time though, and it’s crazy to see and play these big venues now and realise that people are there for us. I think we’ve gotten pretty comfortable with it, we don’t tend to get nervous anymore or anything.

What’s a typical day like when you’re playing at a festival? Do you have time to check out any other bands, and if so, who do you usually watch?

A typical day at a festival usually starts with us waking up and immediately starting to panic as to where we have to be. We’ve never really been on too late at one before so we get to do our thing early on and have the rest of the day to chill and hang out. We get to watch a lot of bands! It depends who is playing obviously but if our friends are there we’ll check them out and support them, Trash Boat, Creeper for example. Slam Dunk we kinda split up a bit and did our own thing, we all got to see every band we wanted to see on that line up which was stacked this year.

You’re signed to No Sleep Records. What makes that label special? Is it the way they operate, or something else entirely?

They’re a really cool label, that’s why we went with them. We dig the way everything’s kinda DIY. They’ve got an amazing roster and have played a big part in helping bands that are huge now.

What are you listening to music-wise these days? What have been some of your favorite albums lately?

As It Is have just released a few singles off their new record that I’m hooked on. I can’t wait to hear the whole thing. I’ve been reigniting my love for Angels & Airwaves lately too. To be honest I don’t really listen to music that much in my spare time anymore, only when I’m driving somewhere or whatever and if i do it’ll be something weird like Florida Georgia Line.

Do you have anyone you’d like to give a shoutout to? What’s coming up in the near future for WSTR?

Obviously we’ve got our debut album release coming Jan 20th which is a pretty big deal for us and then we head out on tour around the UK with Seaway on 24th of that month for a couple weeks. Exciting times ahead for sure. And yeah why not, I’ll give my dude Sean Harrop a shout out and tell everyone to go check out his band Schema!