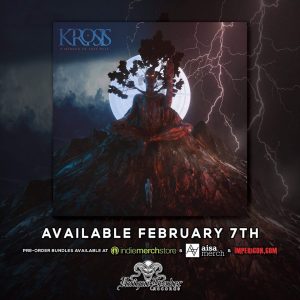 2020 is finally here! Now we can all focus on the incredible releases lined up for this year, and those not yet announced. Krosis is one of them! The North Carolina death metal outfit is preparing to release their newest album A Memoir of Free Will on February 7th, 2020 via the legendary Unique Leader Records! Krosis will be hitting the road in February with A Wake In Providence and God Of Nothing. You’ll definitely be hearing our take on the record soon to fully indulge yourselves into our thoughts on the next chapter of Krosis. We will say this album is packing nuclear energy. We had the honor to sit down with Daniel Cece, the man behind the kit, to discuss the upcoming record and chat about music.

Hey Daniel! It’s an honor to chat with you about your time in Krosis! How are you?

It’s an honor to chat with you as well! I definitely can’t complain. I’m very glad to be back home, although I did have a blast on tour. Excited for the next one!

We are excited to talk with you! We’re glad the tour was a blast! So tell me, how did you find yourself in Krosis?

Joining this band was actually almost like a pick of destiny. I was waiting tables at the time and happened to get a table that had my guitarist, Adam, and his family at it. I had known him peripherally through going to shows and Facebook and such, but wasn’t really acquainted. I mentioned I was a drummer, and he mentioned a project that he and his friend were trying to get off the ground named, “Krosis”. Days later, I came to a tryout in their garage, and the rest is history.

February 7th you guys will be unleashing your new album “A Memoir of Free Will” – tell us about the album and what it means to you?

This album is definitely the proudest thing all of us have ever produced, hands down. We spent more time on this one than anything before. Mac devised an absolutely stunning storyline concept that adds a new layer of lyrical depth than we’ve ever showcased. Musically, we wanted this to be the best of our best, and wrote and edited so much that we had to pick our favorites from the pile which we believed were our most worthy. The standards we set for this one were incredibly high. This is everything we wanted Krosis to be from an artists standpoint. No filler, no excess. This record is the embodiment of our next level in every way.

We are very excited for the album! You guys have grown alot musically in the last few years. What is one thing you’re really excited about next year with Krosis?

February is actually going to be an insane month for us. The new album drops on the 7th AND we’re leaving the day before for our headliner tour with A wake In Providence and God of Nothing. We’re so excited to be heading on the road with them and we’ll be playing a bunch of new songs from A Memoir of Free Will each night. Aside from that I’ll be heading to NAMM with our bassist, Brian, in January and I’m incredibly excited to be back there!

How long have you been drumming?

Christmas mark 11 years behind the kit. It seems like yesterday I walked into my uncle’s weight room with my first Groove Percussion 5 piece set just sitting there with a bow on it. My uncle plays guitar so he picked it up and we started jamming. The rest is, again, history. What first brought you to sit behind the kit? I’ve always loved drums. Watching the dudes in bands I liked growing up as a kid blew my mind with how they could play so fast and accurate. I remember the first time I actually sat down on a drum set when I was at a music store (Guitar Center, if I remember correctly) and just felt so at home. My parents picked up on that, and Christmas day in 2008 it became a reality. Have you been in any previous bands before? Ha, yeah, but none that I can really say ever really got any notoriety. Disturbing the Peace and The Potter’s Field to name the main two. I played one big show when I was in TPF with Upon a Burning Body and Lorna Shore but we broke up right after for some reason.

Tell us about your favorite moment on tour?

Honestly, the last tour we were on had most of the incredible moments I’ve experienced on the road so far. I think making it to California and walking into our first epic venue we’ve ever played on a tour, especially being on the other side of the country, was surreal. We’ve all come from very humble beginnings so to experience a tour full of amazing venues and crowds and payouts was overwhelming to say the least.

Well deserved! You guys have worked hard. What are some of your out of music hobbies?

Video games are a big one. I’m a PS loyal guy so I’m all about those exclusives. Other than that I just work at my two jobs and hang out with my girlfriend and family. I enjoy going to shows, especially when there’s no stress of having to perform. I’m incredibly boring outside of the band life and I wouldn’t have it any other way.

Walk us through your drum kit and your gear?

That’s quite the setup! I’m excited to see it in action soon! It’s been an honor talking with you Daniel, anything you’d like to mention?

The honor is all mine! I really just want to say thank you to everyone who’s helped me get here. My family, my bandmates, my friends, my endorsers, all the Krosis fans and supporters, and every single person who’s been a part of my journey. You all have a special place in my heart and I remember every single thing you’ve all done for me.

Krosis is one of those bands that have worked hard since their inception and deserves all the opportunities put forth in front of them. Krosis has released a stand-alone single, 2 singles from the album, and a handful of playthrough videos in antipaticipation of “A Memoir Of Free Will” 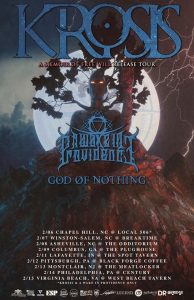