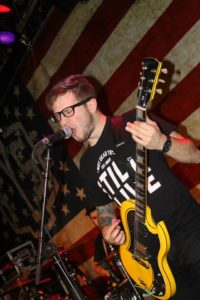 I recently caught up with guitarist Brandon Pagano from Handguns before their set outside of The Social in Orlando, FL. We talked favorite music releases, their full length “Life Lessons”, and more. Handguns were recently announced to be a part of this year’s Vans Warped Tour, be sure to check them out on all dates.
–

Q – You guys are currently on tour supporting Four Year Strong and Comeback Kid, how has it been treating you so far?

Brandon – It’s been going great. I think this has been my favorite tour, lineup wise that I personally have ever done. It’s just cool to be on tour with a band like Comeback Kid, and like Four Year Strong, who basically one hundred percent inspired us to do what we do. We loved both of those bands a lot growing up, so it’s cool to actually be able to meet and become friends with them and actually do this tour with them, for them to take us out.

Q – You released “Life Lessons” back in July, how has the reception for the album been so far?

Brandon – It’s been really cool. A lot of people have been talking about the progression from the last record to this one, which is what we were going for. We just kind of wanted to hone in on a certain sound, and to refine it as well as possible for us, and I think we wrote a really cool, fast and catchy record. Everyone’s been really excited about it which is cool, the new songs go over really well live,

Q – Can you tell us a little about the lyrical side to “Life Lessons” ?

Brandon – Taylor and I split lyrics on that record, and hence the title, each song was a lesson we had learned throughout that year of touring. Being on the road, trying to manage relationships and friendships, and stuff like that. Each one talks about a different event that happened throughout our first year as this new lineup, so it was pretty interesting, like we got to document our entire career as this lineup of the band. We worked really hard on it and we really wanted to push ourselves as lyricists, me and Taylor both.

Q – You mentioning the band in it’s currently new lineup… How has the band been able to endure the many lineup changes throughout it’s history?

Brandon – It’s a really weird thing, this lineup that currently plays and writes all the music all came together at the same time, kind of. Basically falling apart, they lost their guitar player, bass player, it was basically just Taylor. Taylor had basically recruited us, I had played with Handguns before filling in and such, and the other three dudes were all in bands with Taylor when he was younger. It’s kind of cool, we kind of started a new band within an already existing form, it was interesting. But we all get along, this lineup hasn’t changed since we got together two years ago, it’s just cool.

Q – You had Paul Leavitt on to produce the album, as well as Alex Gaskarth from All Time Low for additional vocal production. How was it working with those guys on the album?

Brandon – It was wild. Paul has done some records that we all really enjoy as a band, so we were excited to go and work with Paul right off the bat. The Alex thing came right when we started doing vocals for the record, and that was crazy because we never expected him to think that it was worth his time to come hang out. We were going on tour with them and things just kind of lined up perfectly, and it was just crazy. I love All Time Low, so it was cool just to have him in the room. He’s worked with so many great producers, he’s co-written songs with Mark Hoppus and Rivers Cuomo, he just knows what he’s talking about when it comes to songwriting. Having him in the room was super beneficial.

Q – Handguns were one of the first bands announced for the 2015 Vans Warped Tour. Being your second time on the festival, what was your favorite thing about playing Warped tour that you’re looking forward to experiencing again?

Brandon – There’s a lot of cool things that Warped Tour brings to bands, but I think my favorite part of doing it in 2013 was all of the friends that we made, that we wouldn’t have made otherwise. From being in different genres, or even if they weren’t in a band, one of the production guys and such. We met so many great people through that tour, and we got bigger tours through that tour alone. So I’m really excited to go out and meet any people we haven’t met yet, as well as seeing old friends.

Q – Are there any bands that you’re particularly excited to see?

Brandon – Neck Deep, they got announced with us and we’re stoked to see them. We don’t get to tour with them as much as we’d like to, with them being from the UK, I don’t get to see them nearly as much. Rotting Out is going to be sick, that’s another band we love, they’re on the same label as us and we listen to them all of the time. Being As An Ocean just got announced too, we toured with them over the summer and they’re great guys in a great band, they’re going to do great on that tour.

Brandon – One of my first concerts was Rise Against headlining with Alkaline Trio as direct support, and Thrice and The Gaslight Anthem opened the tour. It was one of the craziest lineups, and I didn’t think it was that wild at the time, but thinking back from now it’s like, “Oh my god, I can’t believe it.”. I wish I could go back and watch that show now. It’s just crazy that The Gaslight Anthem opened that tour, they would easily co-headline that tour now. They’re a huge band, and it’s cool to be able to say I saw them when they were opening tours.

Brandon – I get this a lot and I never can remember what was released either two years ago or last year(laughs). The newest Modern Baseball record is really great, “Rented World” by The Menzingers is phenomenal. Every Time I Die’s new record, 68’s record was great, Fireworks newest was amazing as well. So many good releases, I could go on forever, but that’s off the top of my head for now.

Q – Is there anything coming out thus year you’re excited for?

Brandon – I think The 1975 are shooting for a release this year, if that’s the case then it’s definitely one of them. I’m pumped on that band, they do a lot with pop music that I’m really about. They’re a very refreshing band.

Q – Coming up, what’s next for Handguns after this tour finishes?

Brandon – We have Warped Tour coming up, and a lot of other things we can’t really talk about yet. But we’re going to be on the road a lot, trying to be on as many tours as possible, hopefully we’ll get over seas a little bit. Start writing, get back in the groove of writing new songs and out them out eventually.

Q – Thanks for taking the time to talk with us, is there any last thing you’d like to say to any supporters of Handguns?

Brandon – We love Florida, and we love playing here, especially in Orlando. Thanks for coming out to shows, and catch us on Warped Tour.