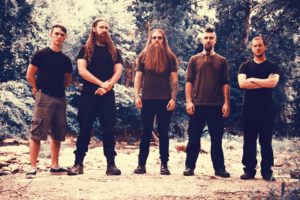 Q – You guys are currently out on tour supporting Napalm Death and Voivod. I know yesterday was the first show of the tour, how did that go over?

Andy – Yesterday was cool, we play early so the crowd isn’t what it usually is at the end of the night, so yeah. But it was really cool, we’d never played Miami before, and it’s a really nice place to be for sure.

Q – You guys have seemingly been touring non stop for the last year or so, opening for tours such as Metal Alliance, Canadian Summer Slaughter, Septic Flesh, among others. When will fans finally get to see a Black Crown Initiate set for longer than a half hour?

Andy – Yeah. we would like to. We did a headlining show on the way down in South Carolina where we played for like forty five, and that was fun. Our set on this tour consists of all new songs, but we did our EP as well. So that was nice, we did eight songs.

Q – ‘A Wreckage Of Stars’ came out about four months back, how has the overall reception for it been so far?

Rik – I think it’s been really good, we ended up on a few end of the year lists for top albums. It’s a good sign that people are picking it up and liking it.

Andy – Yeah, we’re happy with it, we’re proud of it. Obviously you look to what you’re going to do in the future to do better, but for our first album we worked really hard, it’s exactly what we wanted.

Q – There is an obviously strong progression from the EP to the new album, was it a conscious decision going in the write the full length?

Andy – That’s kinda how it will be with us always. We pride ourselves in growing and changing, not only as individuals but as musicians too. It also has to do with the two new members, the EP didn’t have Rik or Jesse, and with them writing it was just naturally different. Rik likes to play fast things, and I’m kind of lazy, so some of the faster stuff on the new album is him.

Q – You’re released music videos for two of the songs from the album, the more recent being for ‘Withering Waves’. What was the initial idea going in to do the video?

Andy – We actually shot the videos for ‘Fractured Ones’ and ‘Withering Waves’ on the same day, which was really , but we did it. grueling

Rik – It was really hot and sweat that day.

Andy – Conceptually, we didn’t really have much of a hang in how it turned out. The video wasn’t really meant to be too conceptual other than the water, we weren’t present when any of that was shot, it just kind of is what it is. Maybe in the future we’ll have more of a hand in what we’re actually saying with the videos(laughs).

Q – You guys put up an Indigogo campaign a little while back to raise funds for a new touring van. I know you didn’t reach the maxed goal, but you still managed to raise a good chunk of it. What were your expectations going in for it?

Andy – I remember a lot of people were really upset that we asked for twenty five thousand. They were like, “You don’t need that much for a van”, and that’s true, but if you can, get a really good vehicle because you live in it, so you might as well. That’s not saying that you have to get twenty five grand, that’s sort of the ceiling on it. I think we ended up getting around five, and that’s good, it really helped us get a vehicle.

Rik – I’d say it was a success, we’re still touring.

Q – So you have the new van currently, then?

Andy – Yep, it says “Faith And Action” on the front(laughs).

Q – Weren’t you guys touring in a Catholic church van?

Q – I have a few random questions regarding the Indigogo video you made…..Firstly, how many hats would you say you wore throughout the video?

Rik – There was the tall hat..

Andy – There was the Abe Lincoln hat, which I’ve been hammered in before.

Rik – I think one of them was a stuffed animal head, not really a hat.

Andy – Oh yeah, no, that was not a hat, but it functioned as a hat pretty well. I had a bigfoot head on at one point. Oh, wait! I had a bear hat too, yeah. My girlfriend got me that bear hat. But I think that bear hat is in retirement now, because a friend of mine puked in it on Halloween. It was kind of a bummer, but I had a good time, I guess.

Q – What was up with the creepy baby-face painting in the background?

Rik – That’s my wife, she does a lot of weird, fucked up baby related, disembodied stuff like that(laughs).

Andy – What’s ironic is they will probably never have a baby, just paint them.

Rik – Yeah, I get to take care of you and three other babies.

Q – Whose cat blanket did that belong too?

Rik – Again, it’s my wife’s, partially mine I guess. Most of that is just how my house looks(laughs).

Andy – It’s true, we really didn’t have to change anything.

Q – You guys were recently featured in Guitar World magazine, how was that whole experience for you guys?

Rik – A life achievement, I would say.

Andy – It’s like a bucket list type thing. I’ve been reading that magazine for almost twenty years, well fifteen, but if you had told me that in 1999 I would have told you that you’re an idiot.

Q – Was it weird to see yourself in the magazine?

Andy – Yeah. It came to my house because I subscribe still, and I looked at the front cover and we’re between Tony Iommi and Geezer Butler’s legs, just our band name, but that was a trip. Then you open to the index, and on one page it’s Tony and Geezer, and the second page is our dumb asses, just two greasy, dumb dudes. It was pretty surreal.

Q – What’s the best concert you’ve ever attended that you did not play?

Andy – I saw Meshuggah open for Tool, and that was wonderful. I also saw Strapping Young Lad open for Meshuggah. Those are the two that stick out the most, but it’s hard to say.

Rik – I would probably say Rammstein, I saw them at Madison Square Gardens which is an enormous venue. I got extremely drunk that day and it was a lot of fun, the show was incredible.

Andy – Yeah i saw them too with System Of A Down, and Slipknot and Mudvayne. IT was the ‘Pledge Of Allegiance’ tour, that was really cool too.

Andy – I like Beyond Creation’s new album, I like Ne Obliviscaris’ new album, the new Decapitated is riff city. The new Revocation was very cool. That was as far as I got into metal that year.

Rik – Pretty much all the ones he said, I love the new Decapitated.

Andy – We are exactly the same.

Rik – (robotic voice)We are the same, yes, I agree (laughs).

Q – What’s the one band you’ve never toured with or open for that you’d like too?

Rik – We’ve already gotten to tour with so many bands that we love.

Andy – If i could only pick one…..Tool. I mean this is hypothetical, we’re never going to tour with Tool. A man can dream though, a man has to eat!

Rik – I guess for me, Meshuggah would be amazing.

Q – Thanks for taking the time to talk with us, are there any last words?