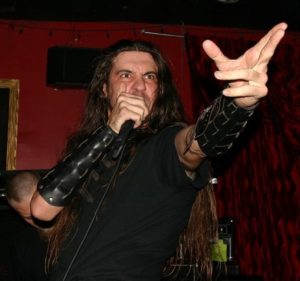 I recently had the chance to catch up with vocalist Ben Falgoust from the blackened thrash band, Goatwhore. We talked about touring, the NOLA metal scene documentary, and more. Goatwhore are finished touring for the remainder of the year, but be on the lookout for any upcoming tour dates for 2016. You can check out our interview after the jump.
–

Q – Firstly, how are you doing?

Ben – Pretty good, waiting for the festive holiday parade to finish up out front.

TNF – I was gonna say, wasn’t sure what all was going on..

Ben – Yeah, I guess there’s some sort of Christmas parade happening at 7:00. We pulled up and…. we usually get to venues pretty early, we got here around 2:30 and 7th street right there was already shut off and everything.

Q – You guys are currently out on the second leg of the “Indiemerch Tour”, with The Black Dahlia Murder, Iron Reagan, Entheos and Artificial Brain. How’s it been treating you guys so far?

Ben – The whole tour has been really good, every band has their own little element. I mean we all share similarities in the sense of being extreme metal bands, but every band has their own thing that they do. And all of the bands have been getting a great response from the crowd, crowds have been really good and really intense. So overall it’s been awesome, and all the bands get along together really well. When you do a lot of tours, there’s rarely a tour where you don’t get along with another band. Out of all the years we’ve toured, we’ve had maybe one or two that we kinda butt heads with. But overall, it’s been smooth.

Q – It’s a very eclectic lineup to say the least. Do you prefer those types of tours aside from every band sounding similar?

Ben – I like any of them, it just depends. Sometimes if they have too many bands that sound the same on the bill, then it can be this overwhelming thing. And at the end of the night….maybe not speaking from the crowd, but as a band playing… at one point you’re like “I don’t even want to be inside here till I play.”. The diversity helps out sometimes, and it also brings different fans in who might not know us. It mixes and matches things and those people get turned onto us, or maybe to Artificial Brain. Maybe our fans will stick around and get turned onto The Black Dahlia Murder. So it all works it’s own little magic.

Q – It’s been roughly seventeen months since ‘Constricting Rage Of The Merciless’ has been released, are there any current plans for a new album?

Ben – We’ve been working on new material. We have probably five songs that are…they’re pretty solid, they just need some fine tuning and stuff like that. But our big goal is to try and get into the studio in the fall next year. But we have a few things we’re trying to do on the road, like in February we’re going up to Toronto to do this twenty year anniversary thing. It’s going to be Macabre, Sacrifice and us. So we’re going up there to do that, and we’re gonna do some little odd market shows through the states and up there. Then we’ll come home, and just work on material.

Q – You guys had Erik Rutan back to produce the last album, which I know he’s done every Metal Blade release you guys have put out. How has it been for you to personally go back and work with him on each record?

Ben – We’ve created a really good relationship with Erik. And I think too because of that he’s able to say “Hey, we should do this.”, or we can turn around and tell him. Where sometimes you’re with a new producer or engineer, and put it out there like “This is how things are.”. You have your idea, but they may have their own scheme. We all work together really well, we have a good relationship with each other. We always try different things and he’s very open about it, and it’s always been a great experience working with him.

TNF – Every band I’ve talked with whom he’s produced for, they’ve always said he’s been one of the most professional guys to work with…

Ben – Not only is he professional, but he’s really down to earth about things. He’s got a lot of history going back with Morbid Angel and Hate Eternal, and all that stuff.

Q – It’s been a little over a year since the NOLA documentary “Life, Death and Heavy Blues From The Bayou” premiered. Looking back on it, how did you feel about it while watching it?

Ben – We were in Europe of April this year with Skeletonwitch and Mortals, and we played Roadburn fest. We did a showing of the documentary, and they had a panel of where it was me, Sammy [Duet], Jimmy Bower and Mike Williams from Eyehategod, and we just discussed it. Even though I wasn’t actually in any of them, we sat around and discussed the New Orleans scene and all that stuff. I think it was really cool what they did. I think they’re actually talking about expanding and dwelling more into the older bands like Exhorder, Graveyard Rodeo and all of those other bands. So it’s really cool that they covered it the way that they did. The aspects of the New Orleans scene, how things have evolved, and where it’s all heading.

TNF – I thought it was really interesting watching certain interviews, especially with Sammy and Mike, where….I mean obviously it was very personal for them, but it seemed like it was very difficult, but relieving for them to talk about it.

Ben – Well yeah. I think in some instances, especially playing in a band, your approaches of confronting things, like drugs and alcohol and things like that. And now being a little older and letting it out, back then and to say “This is what was going on”, “This is what I was doing.”, and “This is how things were done.”. And they definitely weren’t quiet about the way they lived their lives, which is unique. People should understand that we all do our own things, we all have our own little deviance, little tricks we try to do over the duration of what we’re doing. So it’s kinda cool to go through and present it and how it affects the writing, and the music in general as well. Aside from all of the other outside aspects of growing up there, and how it influences you.

Q – What’s the best concert you’ve ever attended that you did not play?

Ben – Oh shit… There was a ton of them when I was a kid. I remember seeing D.R.I, Kreator and Holy Terror, back when it was D.R.I touring for ‘Crossover’, and Kreator was touring for ‘Terrible Certainty’, and that was pretty fucking crazy. More recently there was a Judas Priest show. Remember a little bit ago they were doing that ‘Epitaph’ tour? It was kinda like a farewell tour, but not really. That’s when Downing left and Faulkner came in. They played at this Hard Rock Casino in Biloxi, MI, about an hour from New Orleans. Well the venue itself isn’t huge, there’s a standing floor room and a balcony with seats, and the stage is kinda small. But it was like from where I’m standing, to the mirror on that bus right there, there’s [Rob] Halford. And to see them in that setting, it’s fucking remarkable. Instead of seeing them in some huge arena or big amphitheater, where everything is so distant. And they were having a great time too, Halford was having a fucking awesome time. He said “I haven’t played a show in a place this small in a long time. And don’t tell anyone, but I’m having the time of my life.”. And it was the last show on that tour, and usually when you get to the end of tours, bands are kinda run down and everything, but they were fucking amazing that night. It was phenomenal.

TNF – I remember seeing Judas Priest a few years back at the amphitheater with Black Label Society and Thin Lizzy, and the show was definitely enjoyable. But then seeing them this past year headline the Hard Rock, which is a much smaller venue, it was incredible.

Ben – There’s just something more personal about the smaller, more intimate experience with a band. I’d say with any band, not just them. Even down to the point of going to a small bar/venue type place, seeing a really intense band, everybody’s going crazy and having a good time. Those are the kind of moments that make those elements happen.

Q – I know you played Maryland Deathfest last year with Soilent Green, did you stick around for the other days? I know i saw you side stage during Uncle Acid & The Deadbeats…

Ben – No, we were just there the one day. And yes and I caught them, and also we went over to Ram’s Head and caught Immolation and a couple other bands. I like it, everything there is pretty close walking distance there. They’ve got it all laid out and it’s convenient to go visit all of these different things.

Q – Have you ever attended the festival aside from that?

Ben – No, I never did. That was the first time I’d ever been, when we played.

Q – What are some of your favorite music releases from this year?

Ben – There’s this band called Under The Church, they put out a record called ‘Rabid Armageddon’ from Sweden. The band Mgla, from Poland, they put out a record called ‘Exercises In Futility’. The new Chelsea Wolfe record, ‘Abyss’. I actually saw her on that tour, and I saw her on the tour for the last record, but this time it was really just, massive sounding. And she didn’t play like a huge place in New Orleans, maybe kinda like The Orpheum here, about this size. But it was intense, and it sounded really good. The new Ram, they’re from Sweden too. They put out a new record on Metal Blade, but I love all of their stuff. They’re like more old power metal/heavy metal type stuff. Their singer has a fucking amazing voice.

Ben – Kinda, but more like early Flotsam And Jetsam. I’ve also been listening to a lot of dark and ambient soundscape stuff. There’s this label Cryo Chamber Records, and they’ve got this record by Council Nine, and the name of it is ‘Dakhma’. And all it is is just sounds like, eerie, ambient and dark soundscapes. It something I like to listen too when I’m trying to focus on things because there’s no vocals, and it doesn’t have drums or guitars, it’s just soundscapes. And it makes me delve into stuff, whether I’m working on art or working on lyrics for a song. It’s just a background thing, and it helps me sleep sometimes.

Q – Thanks for taking the time to talk with us, any last words?

Ben – This is going to be the tie in, the end of the year for us as far as touring. And we’re going to radically do a few things next year. Hopefully have a new record out in…if we go into the studio in the fall, it probably wouldn’t come out till early 2017. Something like that.