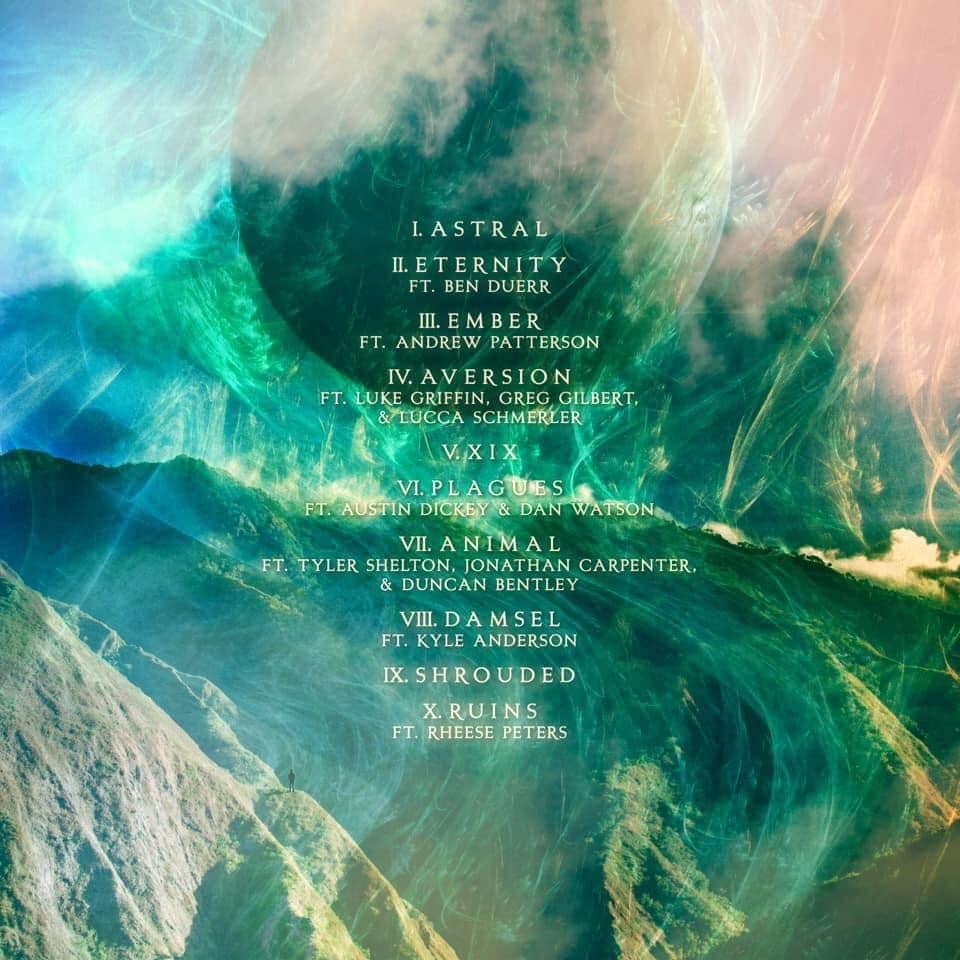 Collaboration across bands is both normal and welcome in the scene. But basing an entire album off of vocal features is a whole different beast. Lost Conduit has accomplished just that, featuring TWELVE vocalists across the genre of deathcore for their debut album Astral. This is going to make for a unique listen, almost a contest of who can hit the lowest gutturals and the highest squeals. Let’s take a listen to Astral:

Self-described as “Spacey / Djent / death metal vibes,” the synthy breakdown reveals this to be true in the title track opener. Riff-heavy, well-layered, and brutal, it’s like a beautiful mix of Born of Osiris and Rings of Saturn. Despite the insane amount of guest vocalists, Lost Conduit’s main vocalist, Justin Haskin (of Desolist), flexes a wide range of highs and lows, benefitted by production techniques to bring out his devastating delivery.

And here come the guest vocalists. Ben Duerr of Shadow of Intent hops on “Eternity.” 42 seconds in, his unworldly growls supplement the track exquisitely. Not to steal the show, though, the rest of the track hits HARD and has a fantastic solo almost akin to a SoI song later on. “Ember” features Andrew Patterson of And Hell Followed With for even more gutturals. Boasting a tom-heavy opening hook and a shredding bridge, there’s also a section at 2:25 that’s at a truly blistering pace.

Here’s a doozy: “Aversion” has Luke Griffin, Greg Gilbert, and Lucca Schmerler (of Acrania, Shrine of Malice, and Mental Cruelty, respectively). With four vocalists (three of which I’ve never heard  before), this is a deathcore dream, as multiple voices manage to kill it over divine instrumentation. “XIX” takes a break from the guests as a futuristic, synth-laden segue for the heaviness to come.

“Plagues” brings Austin Dickey (For the Likes of You) and Dan Watson (Enterprise Earth) into the fold. Austin has flaunted his high register in Jared Dines videos, so I knew he’d unleash something unreal here; Dan’s sections are just as impressive, bellowing deep lows that could shake speakers. “Animal” is the other big dog on the album, with Tyler Shelton of Traitors, Jonathan Carpenter previously of The Contortionist, and Duncan Bentley of Vulvodynia. Traitors usually opts for slower slams, but Tyler hangs without issue; Jon provides the only clean vocals on Astral, which fit like a glove, and Duncan’s vitriol is center stage in his feature.

“Damsel” has Kyle Anderson of Brand of Sacrifice lay down an intense verse. This track premiered on Chugcore’s YouTube to much acclaim in November, and still manages to impress half a year later with entertaining vocals, great use of synth, and complex instrumentals. “Shrouded” is another break from the action, with masterful synth runs to blend into the final track.

Astral finishes up with “Ruins” which features Rheese Peters of Babirusa. Nothing’s held back in this great album closer, capping it off with a wide array of uncleans. Lost Conduit hit a grand slam with Astral. The range at hand is unfathomable, with each guest vocalist giving it their all for memorable performances. This is some of the best djent I’ve heard since Veil of Maya’s Matriarch. Chances are, if you like deathcore, you’ll know a vocalist on Astral. Explore Lost Conduit’s debut when it hits this Friday, July 3rd!

A press copy of Astral was provided courtesy of Lost Conduit.