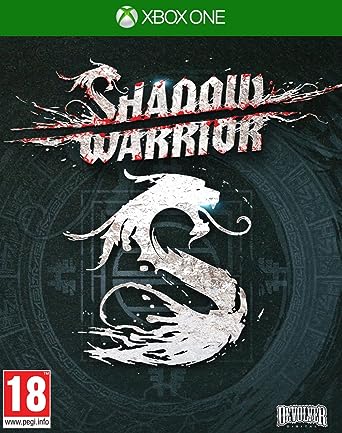 Shadow Warrior is a game that preys off the old school Doom and Wolfenstein design but with new age touches and creates a fun nonstop assault of arcade violence.

You play as Lo Wang, a one line cracking foul mouthed man straight out of games from yesteryear. After a weapons deal gone bad, Wang must travel to collect pieces of a sword to help his demon side kick, Hoji. The story while often over the top is told through colorful cut scenes and dialog between Wang and Hoji.

Using your sword and a array of weapons you take down thousands of enemies in your path for the sword parts. Weapons like the SMG, Shotgun, and Rocket Launcher get saved from being generic by the upgrade system in game. Duel wield weapons, add laser sights, control rockets mid flight, these are all options you can upgrade by using cash you find around the world exploring.

The real draw however is the katana. Using it to slice and dice enemies is always rewarding. Cut off arms, legs, heads, or just slice your enemy into little bite sized pieces in bloody fashion. While later enemies ultimately make your katana someone useless compared to weapons it never gets boring to use against most.

By collecting Ki Crystals and getting Karma points, earned by varying your kills, you can upgrade and unlock powers and skills to use during combat. Stab attack, 360 degree swings, force blasts, and more add a entirely new element into the FPS combat making it to where you can manage what is essentially combos.

Level designs are made for exploring and finding secret areas. Be ready to back track often though in your process of clearing enemies, finding keys, and unlocking path ways. There were a few times though where the path would become unclear, sometimes with it being behind a object or in a row of trees blending together. With no navigation system at all either you are left to constantly explore to find a way.

Later levels in the game often times will just throw insane amounts of enemies at you in every direction, often times including larger enemies that take a considerable amount of damage to kill. This results in either cheap deaths or what just feels like a mission that drags on for no reason.