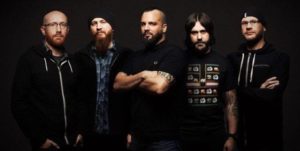 In the history of mankind, there have been many debates that pit two similar but opposing sides against each other. Tom Brady or Joe Montana? Walter Payton or Jim Brown? Zeppelin or Sabbath? Rolling Stones or The Beatles? Just to name a few. There’s also one that metalcore fans are still debating endlessly on internet forums to this day, and that’s this one – Jesse or Howard? (Both are correct answers)

Regardless of which vocalist you prefer, Killswitch Engage are true metalcore icons. A true metalcore staple from the early 2000’s, Killswitch Engage’s second album, Alive Or Just Breathing, was a resounding success upon release – at least critically. It was released at a time when metalcore’s initial oversaturation hadn’t yet begun to happen, and it ended up being one of the best albums to represent the genre, as well. Positive and passionate lyrics were backed up by great musicianship and well-placed breakdowns to create an album that was often imitated, but never duplicated. The opening to “Numbered Days” alone should convince you.

Hard to believe this masterpiece is 16 years old.