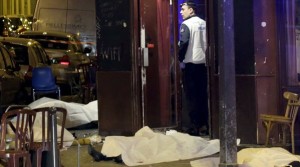 Frightening news coming out of Paris, France today – various news sources are reporting that dozens have been taken hostage, and the death toll is at least 18 in Paris. (Edit: 129 confirmed dead, with death toll expected to rise significantly). Metal Injection is reporting that multiple areas were targeted, and explosions were heard outside a football game between the French and German national teams. This is a developing story – you can also check out information from Metal Injection and Consequence Of Sound below.

This story is still developing but here is what we know: a string of terrorist attacks have hit Paris this evening with at least 18 dead, with some outlets reporting as many as 30 dead. There is a hostage situation at a Paris concert venue, Bataclan, where the Eagles of Death Metal played a sold out show. The terrorists reportedly have 100 people held hostage (originally reported as 60). There are six to eight attackers inside the venue currently engaged in a shootout with police.

This is the latest report from Consequence Of Sound:

The city of Paris was stricken by a series of terrorist attacks on Friday night. The latest reports have at least 40 dead and many more injured.

Among the targets, the music venue Bataclan, where Eagles of Death Metal were performing a sold-out concert this evening. Police believe terrorists are holding 100 hostages inside the venue.

According to CNN, witnesses from inside the venue say there are between six to eight attackers, who are currently engaged in a shootout with police.

Eagles of Death Metal is the collaboration between Jesse Hughes and Josh Homme of Queens of the Stone Age. Homme did not join the band for their European tour, however.

Below is a video of the game with audible explosions in the background.

A fully live report can be found at Telegraph UK.

Edit 18:37 Eastern Time: Tweets and posts on social media are coming out that are absolutely frightening. 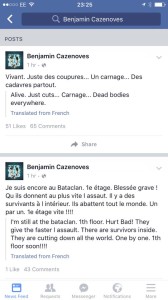 Edit 19:57 Eastern Time: According to a Yahoo News report, the death toll is now above 100. 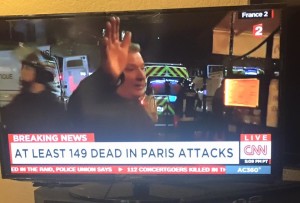 Here’s how you can help the victims of the terrorist attacks.