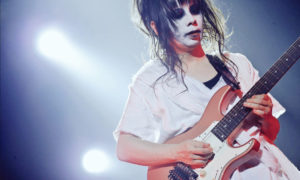 Mikio Fujioka, guitarist for the Japanese metal-pop band, Babymetal, passed away at the age of 36. Babymetal confirmed his death in an official post written on their Instagram account on Tuesday (Jan 9).

Although no reports have been confirmed by the band, numerous sources report that Fujioka died on Jan. 5 from sustained injuries after falling from an observation deck on Dec. 30.

Fujioka had been touring with Babymetal since 2013 as one of four guitarists in the live backing band, this included dates opening for Guns N’ Roses and Red Hot Chili Peppers last year.

Babymetal’s post pays homage to guitarist Allan Holdsworth, who died early last year, and a quote from Babymetal’s song; The One:
“We are the one. Together. We’re the only one. You are the one. Forever.”

‪The “Little” Guitar Kami of #BABYMETAL ‘s #Kamiband has passed away in the METAL GALAXIES. We hope that he is now with his GUITAR MASTER A.Holdsworth and enjoying an epic guitar session with him. ‬ ‪We are the one‬ ‪Together‬ ‪We're the only one‬ ‪You are the one‬ ‪Forever‬ ‪#RIP #THEONE ‬