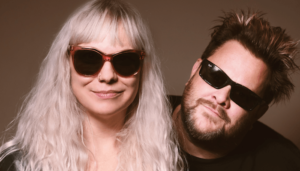 Jaret & Kelly are comprised of the pop-punk giants frontman of Bowling for Soup, Jaret Reddick, and leading lady of pop-punk outfit The Dollyrots, Kelly Ogden. The twosome have been friends for a very long time, almost a decade, and the two have collaborated on songs in the past, most recently on the intro theme song to ABC’s hit show ‘Schooled’. Now, firstly I’d like to point out that pop-punk isn’t usually my cup of tea, I like some pop-punk, however as a rule, I’m a core boy, through and through. Needless to say, I like to give everything a go at least once, and I go in with an open mind, so here goes.

So, as the album title would suggest, ‘Sittin’ in a Tree’ – this is a love album, however, not all soppy ballads although track ‘Butterflies’ certainly is. The two main bands, Bowling for Soup & The Dollyrots are pretty much wrapped around love songs, and romanticising, however they have changed the game, just because it’s a love song, doesn’t mean it has to be just acoustic guitar, and soppy lyrics, these two have fun with it and it works so well!

Having two main vocalist in the same duo makes for a difficult triumph, however, some songs on the album sound more like Bowling for Soup and some The Dollyrots. The great thing about this album is, they have fun, and it has comedy elements in it, almost reminding me of Tenacious D at times.

This album has a huge staggering fourteen tracks on it, and the majority of the tracks sound different. Some songs sounding like Bowling for Soup, some sounding like The Dollyrots and some pull different elements from other genre’s like ‘Daddy’s Girl’ has a country twang, and not focussing on a romantic relationship, but one of a father/daughter relationship, and it’s quite refreshing to hear actually.

In track 8, ‘Yourself Again’ the chemistry between Jaret and Kelly really works, and the song is old school pop punk, with the duo bouncing off each other and almost answering each other, and I dig that.

‘That Night’ sounds very funk orientated, and I always say in my reviews, if an album can add in all sorts of elements, and genres, and it work, then it is a thumbs up for me, and this album is exactly that – I did give it a 7/10 however, upon another listen I have bumped it up to a 7.5 just because they do experiment with all sorts of genres, and that is inspirable as an artist!

Please show these guys support, you can preorder their upcoming new album ‘Sittin’ in a Tree’ here: 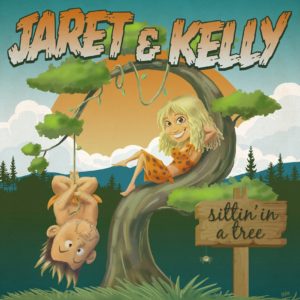