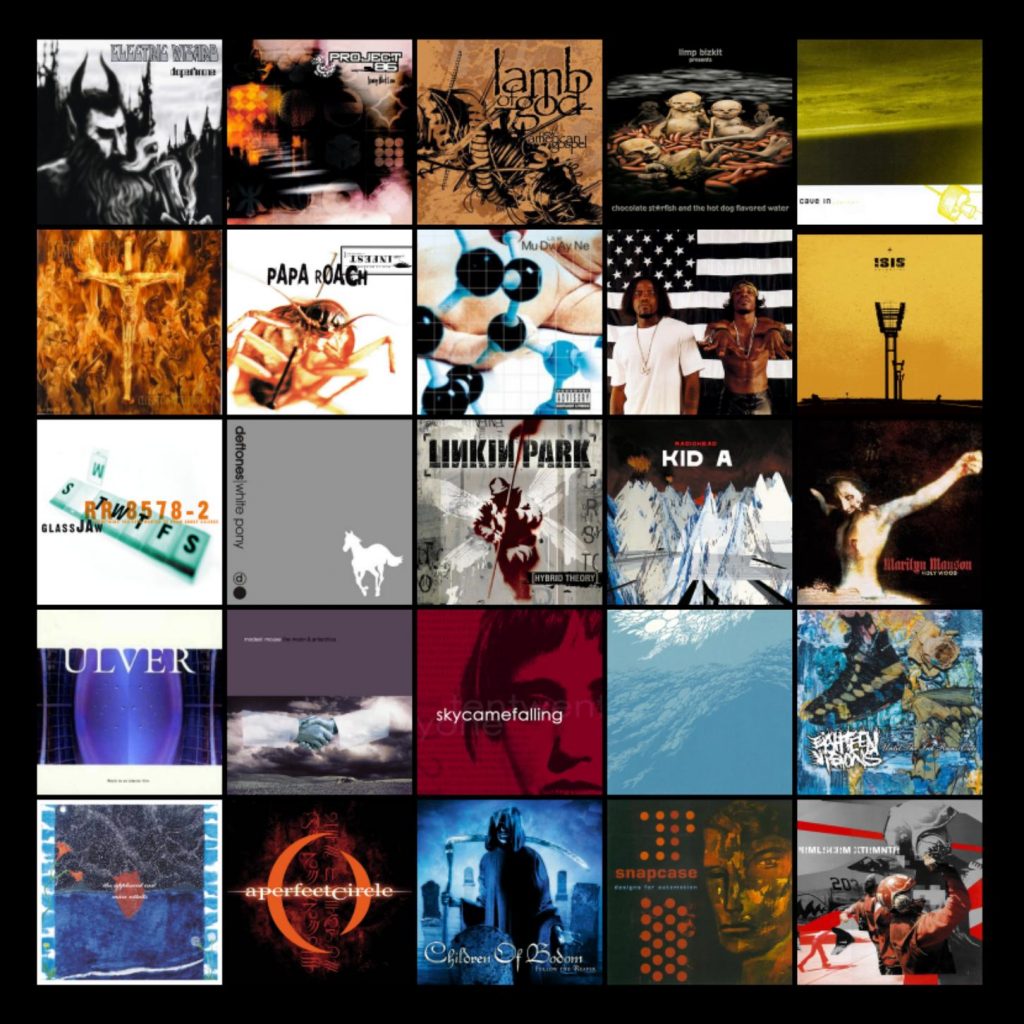 Few years in the annals of music history are more significant than the year 2000. The turn of a new millennium brought with it a rapidly changing musical climate, and as the music industry inched closer to its current reliance on streaming, new genres of music became marketable. 20 years ago, you had nu-metal hitting its commercial peak, with the oncoming storm (hah!) of post-hardcore and metalcore not far behind, in particular. You also had post-metal upstarts like Isis start to emerge out of the underground, the humble beginnings of Lamb Of God, and many more.

Join us as we take a look at 25 albums you won’t believe are turning 20 this year. From Outkast to Radiohead, Marilyn Manson to Mudvayne, and Linkin Park to Limp Bizkit, the gang’s all here.

Hybrid Theory introduced the world to Linkin Park, quickly becoming the record almost everyone had in their collection. It’s also one of the top 50 highest-selling albums of all time.

Holy Wood was Manson’s first post-Columbine record, and fittingly occupies a midpoint between the aggression of Antichrist Superstar and the Bowie-influenced Mechanical Animals.

Celestial was the birth of a post-metal mainstay in Isis, whose previous EP’s – especially The Red Sea – all led up to this. Subsequent listens, especially Oceanic and Panopticon, would improve on the sound Isis established.

One of nu-metal’s most overlooked records, Drawing Black Lines kicked off a run of three more stellar alt-metal albums that really deserve your attention.

If you don’t think the bass matters in metal for some reason, listen to basically everything Ryan Martinie does on Mudvayne’s L.D. 50. “Everything And Nothing”, in particular, is a clinic.

A wall of sound.

Stankonia is a masterpiece of Southern hip-hop that would be any other act’s best record…except Outkast had already released ATLiens and Aquemini in previous succession. Still, it’s impossible not to dance when you hear “Ms. Jackson”, or the underrated “Gasoline Dreams”.

Primal Scream’s comeback really started with 1997’s Vanishing Point, but it was 2000’s XTRMNTR that really sealed the deal. The band’s second definitive album alongside 1991’s Screamadelica, it was also the final ever album released on Creation Records, truly signaling the end of an era.

Peak Children Of Bodom, with all the riffs, solos, and keyboards you desire from a melodic death metal album. One thing this record has going for it is that fans of black metal and power metal will also dig the reckless (and relentless) bombast the whole way through.

The Moon and Antarctica (Modest Mouse)

“It’s hard to remember to live before you die.”

Ulver have built a career on drastic, left-field turns when it comes to genre.

Until The Ink Runs Out (Eighteen Visions)

Orange County metalcore that helped to pave the way for future bands in the scene with bludgeoning riffs, breakdowns, and genuine fun. RIP Mick Deth.

Lamb Of God’s official humble beginnings (if you don’t count their previous record as Burn The Priest, which you should), New American Gospel was a stepping stone to post-Pantera, groove metal greatness.

Everything You Ever Wanted To Know About Silence (Glassjaw)

Was anyone really expecting the futuristic, seismic stylistic shift that Radiohead underwent from OK Computer to Kid A? 20 years later, that’s still unlikely.

Old-school metalcore mixed with lush, post-rock and ambient influences that also flew under the radar. Now’s your chance to experience something influential.

2000 was one of the biggest years for commercially-minded rap-rock, and Papa Roach’s debut album certainly fit the bill. Led by the anthemic “Last Resort” and the overlooked “Dead Cell”, Infest helped immediately break the band into the mainstream.

Close To A World Below (Immolation)

One of the most important bands to emerge from the New York death metal scene, Immolation’s fourth record is arguably their most impressive achievement. Why? The bludgeoning riffs and atmosphere conjure up the very (auditory) image of being in Hell.

Cave In’s transformation from aggressive, dissonant metalcore band to space rock influence act was a jarring one, to be sure – but also a welcome one. Do you like big riffs? Listen to Cave In! RIP Caleb Scofield.

One of post-hardcore’s most influential bands, Snapcase’s brand of riff-heavy post-hardcore clearly influenced the likes of Grade and Thrice.

White Pony twisted around Deftones’ signature sound (to that point), adding in elements of dream pop, post-hardcore, and electronic soundscapes to their already textured sound. Brilliant.

This Limp Bizkit record, which capitalized on the success of 1999’s Significant Other, sold over a million copies in one week.